skip to main | skip to sidebar

Noticed how Farmers Markets and Country Markets just seem to pop up all around us? Same for the small rural community of Nolalu: as of yesterday we now have our very own Country Market, thanks to Leo Hunnako and Jacomyn Gerbrandy who made it happen! 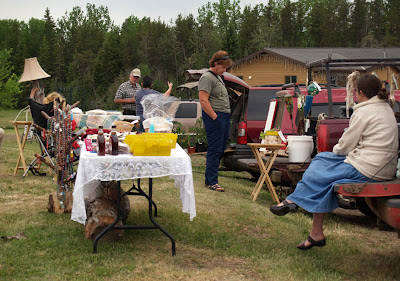 This first edition had 6 vendors selling their wares from the back of their trucks and vans, from plants and vegetables to handmade soap and artwork - and much more. More vendors will join as the growing season progresses. 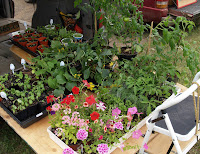 Local markets selling locally grown food and handmade items are a wonderful addition to  any community. You know you're getting excellent value for your money and whom you're getting it from (not some anonymous multinational but your hardworking neighbour), the money spent stays in the community, you don't have to travel all the way into town (smaller carbon footprint) and it's just plain fun to hang out and chat for a bit. And should you feel like something to eat or drink, Jacob's Cafe is only a few steps away.

Local markets are also a significant step on the way towards food security. Food prices are rising at the same pace as the steadily rising price of gas (oil). Here in our part of the province most of our food gets trucked in from enormous distances, making that food more and more expensive - not to mention what it does to the quality of the food and the carbon footprint involved. Country markets can be an answer to this issue.

Hope to see you some Friday afternoon at the Nolalu Country Market. You can't miss it, just look for the signs!
Posted by Nolalu Eco Centre at Saturday, May 29, 2010 1 comment:

Knock, Knock. Who's There?

A soft thumping sound revealed a smaller kind of wildlife last Saturday: a turtle trying to get in, probably looking for a sheltered place to lay her eggs. 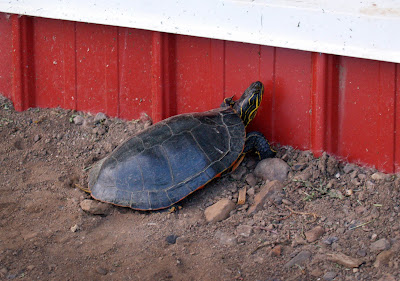 The unseasonable warm weather must have brought her out early this spring. The long range weatherforecast predicts balmy temps and lots of sunshine, so her eggs stand a good chance of making it  (not inside, though!).
Hope her baby turtlets grow up to be as beautiful as their mom.
Posted by Nolalu Eco Centre at Tuesday, May 25, 2010 No comments:

I sometimes joke that we don't need to go anywhere to spot wildlife, we only have to look out the window and there it is: deer, bears, eagles, moose, you name it. Still, some wildlife appears more frequently than other, moose being of the more elusive kind.
It's always a treat to encounter a moose, that icon of the north woods - especially if it happens to amble by in your own back yard. I've spotted this female a few times now, always at dusk. This time she gave me just enough time to get my camera.
I always marvel at how hard to spot they are despite their bulk (think horse-sized), and how graciously they move. 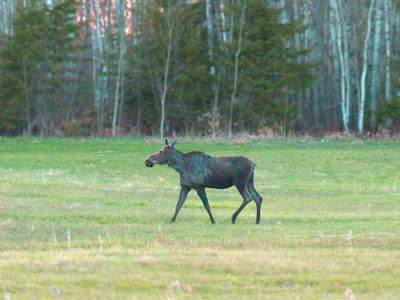 Unfortunately we're seeing less and less of them. The moose population has dropped rapidly in this region over the past few decades, from several thousands in the 1980's to a few hundred now. At the same time, the deer population increased dramatically.
Climate change is the main culprit; the milder, shorter winters are great for the deer who now survive in much larger numbers. However, deer transmit a brain parasite (the "deer tick") that is fatal to the moose. Basically, a lot more deer also means a lot more dead moose.
Second, in longer, hotter summers moose tend to eat less, and as a result their odds to survive the winter (on less fat storage) decrease proportionally. On top of that, longer and hotter summers also result in less wetlands for the moose to graze and cool off in, which doesn't help, either.
What it means for Northwest Ontario's moose population is anybody's guess, but it's safe to assume things will get a lot worse for the moose before it gets any better.
As for us, we're just happy to have over 30 acres of beaver ponds for the moose to roam around in. And don't feed those deer...!
Posted by Nolalu Eco Centre at Sunday, May 16, 2010 No comments:

Ain't It The Truth

(click to enlarge)
Sometimes I feel like that guy with the glue brush... (with thanks to Wiley Miller and his brilliantly perceptive comic strips).
Posted by Nolalu Eco Centre at Sunday, May 09, 2010 1 comment:

A few weeks ago we were pleasantly surprised by a request for a book presentation here at the Eco Centre. Turns out that Kathy Ashby who just published her first novel "Carol, A Woman's Way", was visiting Thunder Bay and in the process of planning a book tour in the area where she grew up. That, together with her book's strong environmental slant, made our location a natural fit.

We felt this was a great opportunity to invite a select number of friends for a "literary potluck" with Kathy as our guest of honour. And that's how this past Saturday afternoon, about 15 people were introduced to Kathy's fictional heroine Carol, and her "one-woman's battle for all she holds dear - her husband, her son, her land and her inner peace" (quoted from the back cover). 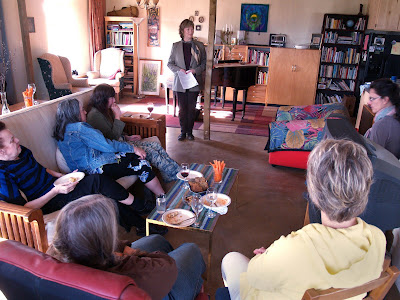 The lively discussion that followed proved Kathy had piqued her audience's interest, and it was good to see a number of (autographed) books leave with new owners that evening.

"Carol, A Woman's Way" is published by Dream Catcher Publishing; Kathy can be reached at ashbykathy @ gmail.com (first remove the spaces in the email address - spam protection), or follow her on twitter at http://twitter.com/awomansway.

As for us, we thoroughly enjoyed this format of friendship, food, fun and fabulous fiction and are open for similar intiatives, so stay tuned!
Posted by Nolalu Eco Centre at Sunday, May 02, 2010 4 comments:

Nolalu Eco Centre
Nolalu, Ontario, Canada
North Ontario's largest straw bale facility powered by sun and wind. Come visit for a house tour or a workshop, or stay at our EcoB&B to experience what it's like to live a rewarding small carbon-footprint life style. www.NolaluEcoCentre.org